Is Aaron Ramsey another 90 million Welshman?

Arsenal did excellent start in the new season and are currently topping the Premier League table. The Londoners have a real opportunity to fight for the Premier League title this season after several years of drought. Aaron Ramsey is certainly one of the pleasant surprises in Arsene Wenger’s squad.

There are not many people who expected such a form of a young Welsh. He scored 10 goals in 19 games so far and 6 of them were scored in the Premier League. Apparently his greatest improvement since last season is movement infront the goal, very effective.

Arsenal bought 22 years old midfielder from Cardiff City for £5 million back in 2008. Ramsey didn’t really impressed at first, but his desire was never questioned. He stepped up his developing in his second season and showed quality to break into the first team. The third season was one of the darkest in his football career, he recieved unlucky injury when Ryan Shawcross broke his leg in the game against Sunderland. You can see the unfortunate tackle in the video below. 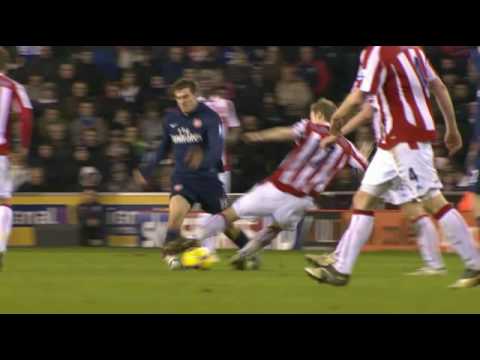 Ramsey came back even stronger, but needed time to sattle and to gain confidence back. It seems he’s what Arsenal lacked in the last years, especially after Fabregas’s departure. Box to box midfielder to cover defensive line and push forward when it’s needed. His technical abilities are visibly rising and his stamina is more than impressive, you will see him all over the pitch.

I hope he can keep the current form and we will see another Welsh fairy tale with happy ending. What is your opinion? How constant can Ramsey be throughout the season 2013/14?